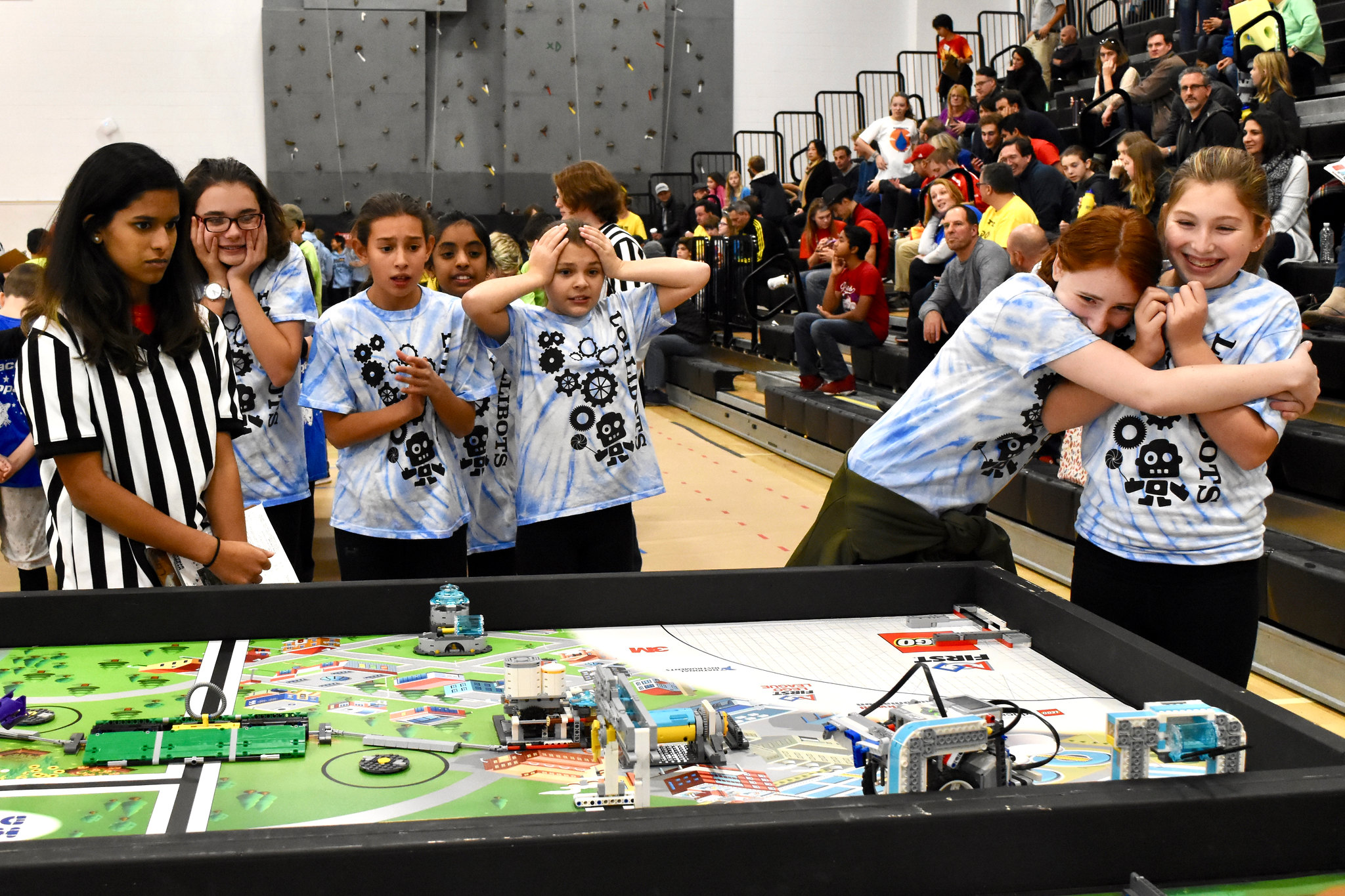 The LigerBots will be hosting its annual FIRST® LEGO® League (FLL) information night on June 22, 2022, from 7:00-8:30, at Newton South High School. If you would like to attend — or cannot attend but are interested — please fill out this form.

For more background on the FLL program, here is the official FLL website and FIRST’s mission statement, this year’s FLL challenge and season info, the FLL season calendar, and FIRST’s response to COVID-19. You can also email [email protected] for more information.

The LigerBots hosted the 2019 Newton Qualifier, a FIRST LEGO League robotics competition for elementary and middle schoolers, at Newton North High School on Saturday, November 23, 2019, and the Eastern MA State Championship, on Saturday, December 14. More than 1000 students, family members, coaches, judges and members of the public attended the two events. 34 teams of Massachusetts students in grades 4-8 competed in the Newton Qualifier and 48 teams in the Eastern MA State Championship. Students compete using LEGO robots they designed, built, and programmed to perform complex tasks. Also open to public view were the displays of student solutions to real-world problems related to the city theme for last year's game, which was called "City Shaper." Information on the game can be found here and a video is here. You can also find 100s of photos from the 2 events on the LigerBots Flickr site.

Alongside the competitions, the LigerBots held maker fairs with hands-on activities for kids in the fields of science, technology, engineering, art, and math. An article about a past competition and maker fair from the Newton Tab can be found here. The competitions also featured an exhibit of some top local FIRST Robotics Competition and FIRST Tech Challenge robots.

FLL immerses teams of up to 10 students, ages 9 – 14 (grades 4 – 8), in real-world scientific and technological problems such as food safety or recycling. Teams research and design solutions to a scientific question or problem and build autonomous LEGO robots that compete in performing assigned missions. Experience in FIRST® LEGO® League prepares students well for high-school-level robotics with the LigerBots. FLL Jr. is a LEGO project-based program for kids ages 6 – 9 (grades K – 3).

The FLL competition consists of a robot game and a team project. The robot game is played on a 4'x8' field and has LEGO challenges (like moving a ball or flipping a switch). The project is to identify a real world problem (within the guidelines provided by FIRST), propose a solution, and present it to the judges.

The LigerBots do not currently directly run elementary or middle school programs, but we are committed to doing what we can to support such programs. To start with, we are setting ourselves up as an information clearinghouse. We will also support coaches with figuring out how to get going.

For more information on how to start a team, you can visit the FIRST® website here or you can contact the LigerBots at [email protected].